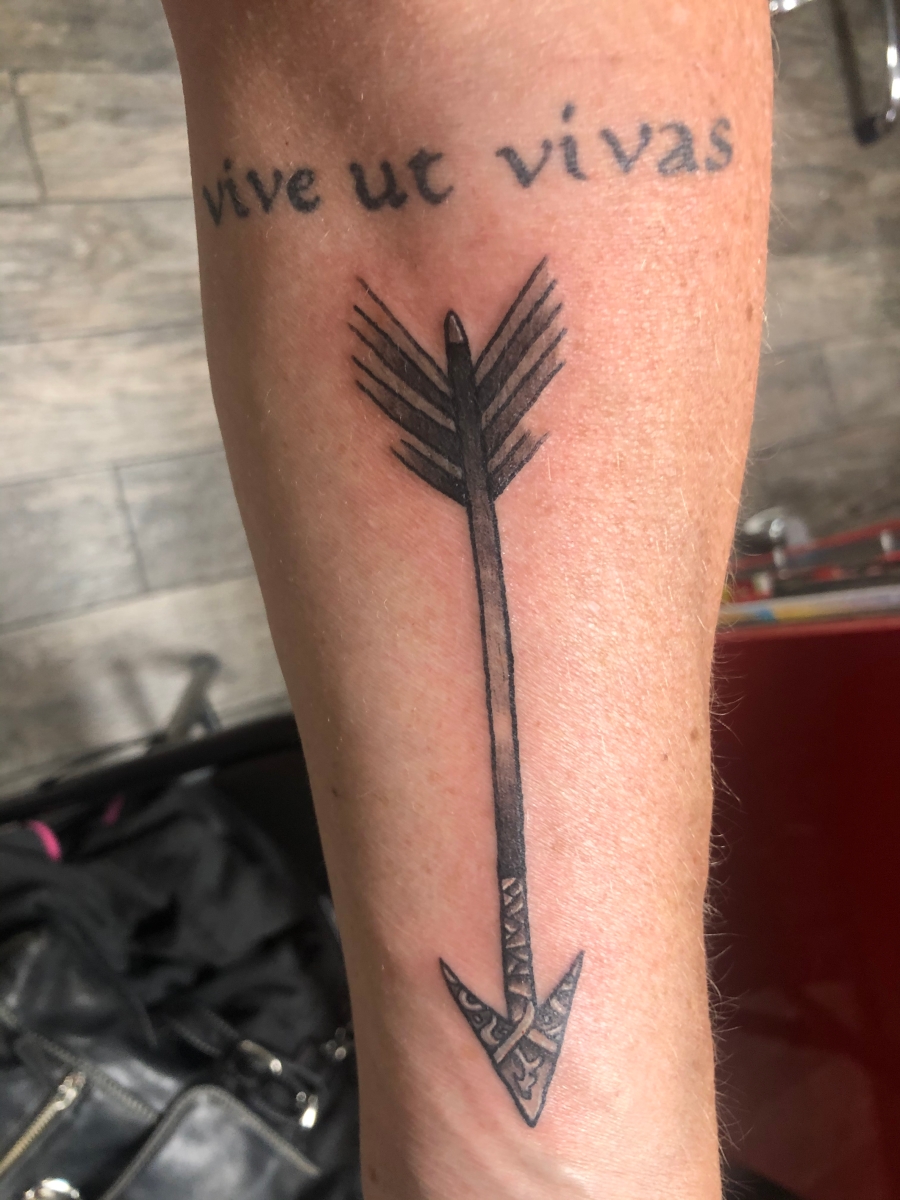 On goes the tattoo machine. The familiar buzzing sound fills my ears.

I’m lying in a supine position, my left forearm at my side. Heartbreaker, my tattooer, gently takes my hand, positioning my arm just so.

So, so ready, I think to myself.

At this time a year ago, I was beginning chemotherapy. I was in for 4 straight months of treatments, followed by a double-mastectomy, 6 weeks of radiation then, recovery.

Shortly after I was diagnosed with Stage 3 Invasive Lobular Carcinoma in my left breast on July 31, 2019, I told myself I was going to do two things on my 1 year anniversary: Get a tattoo and drink my F* Cancer IPA.

The inspiration for the tattoo came from a bracelet I was gifted the very day I received my diagnosis. My friend Liz somehow knew I needed this bracelet. It’s simple, which is just my style. It has two Scandanavian rune arrows of victory at each end, and the inscription engraved inside reads “Keep Fucking Going”.

I have worn the bracelet every single day (not including surgeries and imaging, of course), since.

The beer was a gift from my-coworker Jeremy. When he gave it to me, he told me we could raise a glass together when I was through this cancer-nonsense. Well, thanks to the COVID-19 pandemic hitting right as I went into surgery back in February, I haven’t seen Jeremy in nearly 7 months.

“Let me know if you need to take a break”, Heartbreaker says, as he moves the machine down my arm toward my wrist.

I’ve been through much worse; this temporary pain of a needle rapidly jamming pigment into my skin is nothing.

I’m nearly 6 weeks past the 1-year anniversary of my breast cancer diagnosis. I had hoped to get the ink, then drink the beer on July 31. But that didn’t happen due to, well, life getting in the way.

I was told upon my diagnosis that it would be the longest year of my life.

The past 13 months or so, at times dragged so much,  it felt like I was moving backwards up a hill covered in tar. Then, before I knew it, it seemed like everything sped by faster than a toddler running with a steak knife. I think a lot about the phenomenon of time passage. How our perception changes, depending on what our brains are forced to reckon with.

Even this tattoo sesh went faster than I thought it would be.

I slowly rise from the table. I gaze at the fresh, new ink and think “I did it. I earned this victory arrow”.

It’s been a few days, and it’s healing beautifully. I can’t stop staring at it.

Thanks for coming by!

I don’t even consider myself a great writer, but, also not a bad one. I mean I did take a couple quarters of college for cryin’ out loud. That should count for something, right?